Webinar: Voices from the SCC - The Fourth Round from Geneva 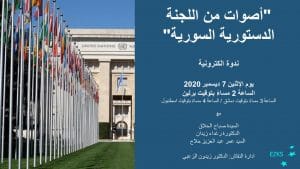 Last week, the fourth round of negotiations of the Syrian Constitutional Committee (SCC) was held. What was the outcome of the session and what is planned for future meetings? What exactly is the current role of the UN? What did the sessions of the SCC look like, how were they structured?

To discuss these questions, the European Centre for Kurdish Studies kindly invites you to participate in our webinar “Voices from the Syrian Constitutional Committee”.
Sabah Alhallak, Dr Raghdaa Zaidan and Omar Abdulaziz Hallaj will discuss the outcome of the fourth negotiation round of the SCC and give their personal impressions about the work of the Constitutional Committee. Dr Zedoun Alzoubi will moderate the discussion.

Join us on Zoom on the following link:

Al-Hallak, Sabah
Sabah Al-Hallak is a board member of the Syrian Women’s League and the League for Citizenship. She is a member of the advisory board of the organization Badael. She was also appointed by the UN Special Envoy to the Women’s Advisory Council, one of four expert bodies that form the basis of the Geneva talks. Sabah Al-Hallak works as a researcher and publishes on gender-based violence, citizenship and women’s rights, discrimination against women and violence against refugees. She is a member of the Syrian Constitutional Committee and among the fifteen members of the Middle Third in the Small Body of the Constitutional Committee.

Hallaj, Omar
Omar Abdel Aziz Hallaj is a consultant in urban planning, development and local governance. He is the co-founder and advisor for the Syrian project in the Joint Space Initiative in Beirut, where he participates in facilitating various dialogue and research projects for peacebuilding and recovery planning in Syria. He was previously the CEO of the Syrian Trust for Development. He is a member of the Syrian Constitutional Committee for the small committee on the civil society list.

Zedan, Raghda Dr.
Dr. Raghda Muhammad Adeeb Zedan from Damascus holds a doctorate in Islamic Studies from the International University of Islamic Sciences in London and is Director of Research Operations at the East Eye Center for Political Studies. Raghda Zedan has been working independently for many years as a researcher in Islamic philosophy with a number of research centers. She has written a number of books, including The Site of Mind in the Shadow of Legislation, The Arabic Magazine Publications, Riyadh, 2007 AD. Against the imposed models, The Cultural Critic Center, Damascus, 2011 – The revolutionary rationalization in the words of Essam Al-Attar, Academy of Science and Peace, 2015 AD. Arabization of Muhammad Iqbal’s book Wandering Ideas, Cultural Critic Center, Damascus, 2011 Algeria: Flags and Works, Dar Al-Asala, Algeria, 2018- The Influence of the Diaspora in Undermining the Values of the Syrian Family, The Transformations of Syrian Salafism from 1885 to 1963, Man Thinking of Malik bin Nabi and many others. She is also a member of the Syrian Constitutional Committee, the smallest body in the third middle list.

Alzoubi, Zedoun Dr.
Dr. Zedoun Al-Zoubi wrote his doctoral thesis in management at the Arab Academy of Finance and Banking. Until August 2019 he was Managing Director of the Union of Medical Care and Relief (UOSSM). He was also involved in youth welfare, humanitarian aid and conflict resolution. He helped introduce the Ethical Charter for Syrian Media, the Ethical Charter for Syrian Humanitarian Organizations and the organization Bokra Ahla. Within the framework of the peace negotiations in Geneva, Zedoun Alzoubi works with the Women Advisory Board and is involved in the Civil Society Support Room.

You can have an overview of our other events by visiting our Events page.