What is the Syrian Constitutional Committee?

The formation of the Syrian Constitutional Committee (SCC) was formally announced by the UN in September 2019. It is based on UN-Resolution 2254, issued unanimously by the UN in 2015. This resolution expresses its support “for a Syrian-led political process that is facilitated by the United Nations and, within a target of six months, establishes credible, inclusive and non-sectarian governance and sets a schedule and process for drafting a new constitution, and further expresses its support for free and fair elections, pursuant to the new constitution, to be held within 18 months and administered under supervision of the United Nations, to the satisfaction of the governance and to the highest international standards of transparency and accountability, with all Syrians, including members of the diaspora, eligible to participate […]”. The Constitutional Committee shall, within the context of the UN-facilitated Geneva process, prepare and draft a constitutional reform for popular approval. Doing so, it may either review the 2012 constitution and amend it or draft a new constitution.

Timeline of the Syrian Constitutional Committee

How does the SCC work?

Composition of the Syrian Constitutional Committee 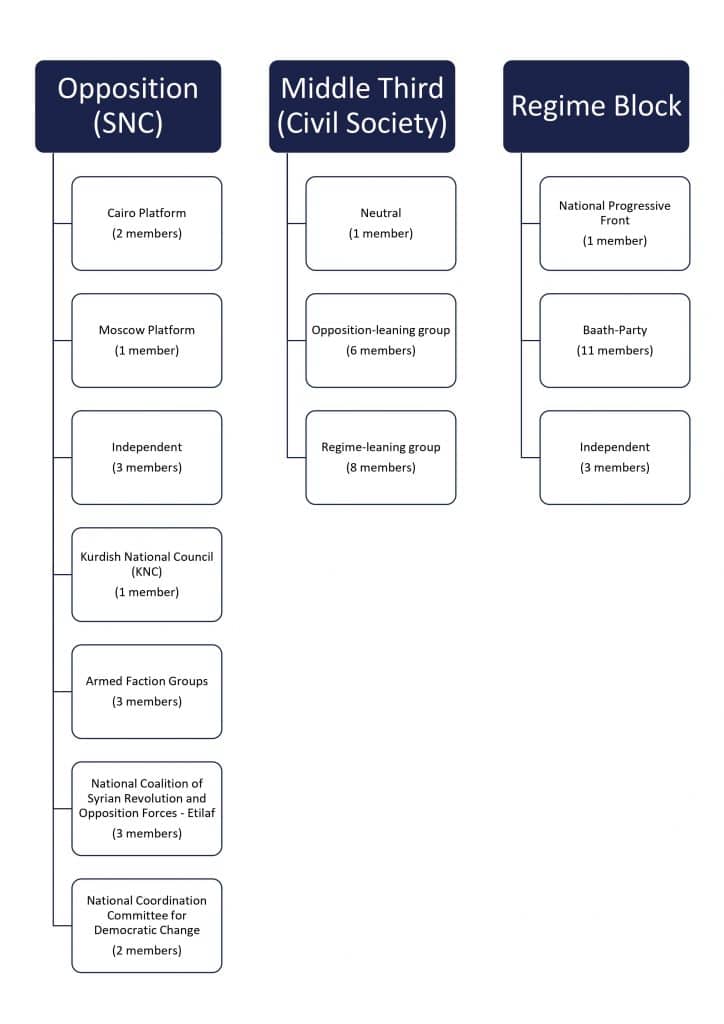 The Syrian opposition is a complex and heterogeneous network of various activists, politicians and groups calling for an end to the Assad regime. Some of its members were active opposition politicians even before 2011, while other groups only formed after the public protests began. Most of the opposition politicians are living in exile and currently cannot return to Syria due to fear of persecution. Some opposition groups have been trying to form coalitions and alliances since 2011 in order to unite the supporters of the opposition and receive international support and recognition. In the SCC, the Syrian opposition is represented by the Syrian Negotiation Commission (SNC) which is currently the largest opposition alliance. However, the SNC is not a homogenous group, but highly divided when it comes to topics as women’s rights, human rights, minority rights, decentralisation, the role of religion etc.

The Middle Third consists of civil society actors and has formally been appointed by the United Nations. However, the SNC, the Syrian government, but also the governments of Turkey, Saudi Arabia, Russia and Iran influenced the selection of the members of the Middle Third. As a consequence, about 50 % of the Middle Third are said to be regime-leaning, while the other 50% percent are close to the opposition. It is thus extremely difficult for this group to find consensus or to build bridges between government and opposition. Moreover, as the Middle Third has no Co-Chair, its members have no possibility to considerably shape the sessions of the SCC.

The SCC members appointed by the Syrian government are mostly state employees. Many of them live in Syria – as a consequence their space to start a meaningful dialogue with members of the opposition or the Middle Third of the SCC is extremely limited. Thus far, the Syrian government has not shown any interest in making the SCC function. The fact that it took from 2015 to 2019 to only establish the Constitutional Committee must be charged to the Syrian government which attempted to change the reality on the ground to its advantage before entering any political dialogue.

How is the Syrian population represented in the SCC? 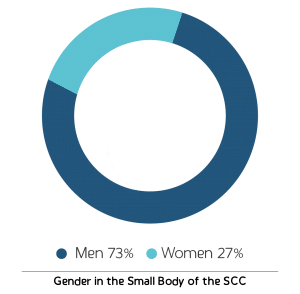 Gender in the Small Body of the SCC

Resolution 2254 is “encouraging the meaningful participation of women in the UN-facilitated political process for Syria.” (UNSCR 2015) The UN Women (Entity for gender and Equality of Women) together with several women-rights organizations and networks demanded a thirty percent quota of women in the SCC and for all negotiating parties. However, neither the opposition (14%) nor the regime (24%) met this requirement. Only the Middle Third exceeded these expectations appointing a share of 40% female members of the SCC. So, in total, 27% of the SCC are female which is still low considering that women make up 53% of the Syrian society. However, the international average percentage for women in parliaments is 24,5%. In detail, this means that the Middle Third has six female members in the Small Body. The Large Body of the Middle Third encompasses another twelve women. In the Small Body of the opposition block, there are only two women (out of fifteen members) represented. Five other women are part of the Large Body of the opposition block. In the regime block of the SCC, there are three women in the Small Body and another seven women in the Large Body. 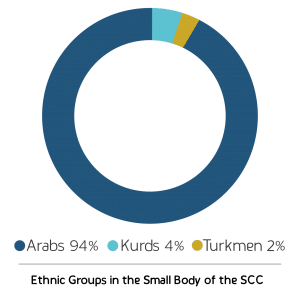 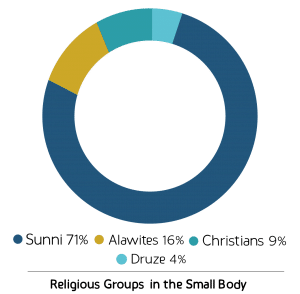 Minorities in the Small Body of the SCC

Even though according to vague estimations around 10–15% of the Syrian population is Kurdish, only six out of 150 members (4%) of the Large Body are of Kurdish origin (two in the opposition block, two in the Middle Third and two in the regime block). In the Small Body, there are two Kurds, one from the regime block and one from the opposition. However, only Kamîran Hajo of the Kurdish National Council (opposition block) understands himself as representative of Kurdish interests.

Not only the Kurds, but also other minorities are underrepresented in the SCC – even though to a lesser degree. With 2%, the representation of Syriacs in the Large Body (two members in the Middle Third and one member in the opposition) is lower than their actual share in the Syrian population (4%). The representation of Turkmen is also 2% in the Large Body (one member in the Middle Third and one in the opposition), thus it is also lower than their share in the Syrian population (4–5 %). Moreover, there are no Syriacs and only one Turkmen in the Small Body (opposition). There is one Armenian in the Large Body (regime block) and one Assyrian (opposition) – however, neither of them is in the Small Body.

One can conclude that the Middle Third is the most diverse with regard to religion, while the opposition block comprises the largest share of Sunni Muslims. 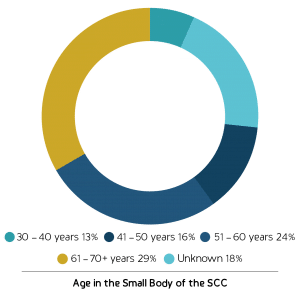 Age in the Small Body of the SCC