As part of our work, we organize capacity building and dialogue workshops
more

We provide information on the Syrian constitutional committee, its work and its members
more

The European Center for Kurdish Studies regularly organizes workshops on constitutional law and the writing of a constitution with members of the Syrian opposition and Syrian civil society.

In numerous dialogue workshops held in cities like Geneva, Erbil, Istanbul, Bucharest, Athens, Berlin, Malta and Sarajevo over hundred people have engaged with increasingly detailed issues of constitutional law concerning the creation of a democratic Syria. The results of these discussions are summed up in our workshop papers. The points established during one workshop were often taken as the basis for discussions in another. Therefore, most of the papers build on one another in terms of content. This, however, does not mean that all participants agreed with all points in the papers.

Our capacity-building and dialogue workshops are held on different topics related to constitutional law and decentralization. To each workshop or webinar, we invite experts who provide academic and professional input to our participants and discussions.

Our Advisory Board supports in particular members of the Small Group of the Constitutional Committee to anchor minority rights as an important part of human rights in the constitution. We want to build bridges between the different members of the opposition and representatives of civil society. Moreover, we want to support them in developing mutual positions regarding power-sharing, minority rights and women’s rights.

From August 24 to August 29, 2020, the second meeting of the Small Group of the Syrian Constitutional Committee took place. Our Advisory Team was also in Geneva. For further details, check out the video.

Who we work with

Our work can be roughly divided into three phases.

The first phase in 2016 brought together members of the Kurdish National Council in Syria (KNC), an association of around a dozen Syrian-Kurdish parties, primarily to discuss the future of the Kurdish areas in a future Syrian state.

During the second project phase in 2017,  representatives and members of other ethnic, religious and linguistic minorities within Syria such as Assyrians and Turkmens were invited to attend the workshops alongside members of the KNC.

In the third project phase, beginning in September 2018, the workshops were opened up to Syrians from all ethnic, religious and linguistic groups. The particular focus is on potential candidates for the Syrian Constitutional Committee convened by the UN.

In 2015, the United Nations issued its Resolution 2254 which calls for a new Syrian constitution. In this course, the Syrian Constitutional Committee was established.  It comprises members of the Syrian regime, opposition and civil society and met for the first time in Geneva end of 2019. We mainly cooperate with members of the small body of the SCC who belong to the opposition and the Middle Third.

The internationally recognized Syrian opposition is called Etilaf or National Coalition of Syrian Revolution and Opposition Forces. In the course of the official peace talks, the Syrian Negotiation Commission (SNC) was formed from which members are sent to the Syrian Constitutional Committee (SCC).

The Middle Third consists of international and civil society actors and has been appointed by the United Nations.

The regime members are government personnel appointed by the Syrian government. 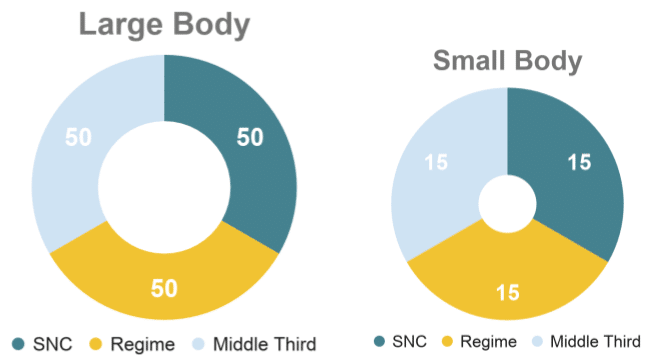 Who is the Syrian opposition?

The Syrian opposition is a complex and heterogeneous network of various activists, politicians and groups calling for an end to the Assad regime. Some of its members were active opposition politicians even before 2011, while other groups only formed after the public protests began. Most of the opposition politicians are living in exile and cannot currently return to Syria due to fear of persecution. Some opposition groups have been trying to form coalitions and alliances since 2011 in order to unite the supporters of the opposition and receive international support and recognition. The Syrian opposition is represented by the Syrian Negotiation Commission (SNC) which is currently the largest opposition alliance at the peace talks that have been taking place in Geneva since 2012.

Despite the numerous setbacks, there are many opposition politicians who continue to believe in a democratic future for Syria and are committed to making this a reality. We would like to ensure that these forces can make their voices be heard and therefore give them a platform which will help to clarify the different positions within the opposition. Despite the lack of progress at the negotiations in Geneva and the disastrous humanitarian situation in Syria, it is important to allow public debate on the work of the Syrian Constitutional Committee (SCC). To make the Geneva process more transparent, we regularly submit questions to members of the Syrian opposition and publish their answers here.

In order to increase the transparency of the Syrian Constitutional Committee (SCC) and its work, we publish, among other things, video clips covering various topics related to the constitutional process. On the one hand, our clips cover the procedural aspect of the SCC’s work and thus focus on the actual meetings of the committee. On the other hand, we present and discuss what may be called “constitutional content” – subjects as decentralisation, human rights, quotas, equality, different governmental systems, elections, or rule of law.

Do you believe in the Syrian constitutional process? 1

Do you believe in the Syrian constitutional process? 2

Do you believe in the Syrian constitutional process? 4
«
Prev
1
/
1
Next
»

One Constitution for all Syrians

In addition to the visual material produced, we conduct studies on constitutional issues, collaborating with academics and experts around the world.

Study: “‘We are not just flowers on the table‘- Women’s role in the Syrian constitutional process”

27,3 percent of the members of the Syrian Constitutional Committee (SCC) are women. This share is low only at first sight, as it is above the international average of 24,5 percent of women in national parliaments. This is thanks to the United Nations who determined a women’s quota of 30 percent for the constitutional committee. Who are the women in the Syrian Constitutional Committee? Which political agenda do they try to achieve? And which strategies do they employ? Whom do they represent? Or are they merely token women as the opponents of the quota fear?

The study “‘We are not just flowers on the table’-Women’s role in the Syrian constitutional process“ deals with women’s situation in the constitutional committee. In the framework of qualitative interviews, we asked them about their areas of interest in the constitutional process, their political strategies and their personal challenges as women in the SCC. We break down the results of the interviews applying an intersectional analysis that includes the categories gender, socio-economic conditions, body and origin, to make unequal power relations visible.

The study concludes that the interviewed committee members work on different topics which are not reduced to women’s rights. They include anti-discrimination, political participation, citizenship and human rights as well. To reach their goals, they build coalitions and engage in consensus building. The most significant obstacle for their work is patriarchal power structures not only in the SCC itself but also in politics and society in general. 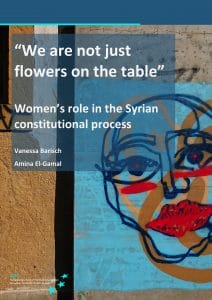 Syria’s new constitution – What about..?

The podcast series “Syria’s new constitution – What about…?” of the European Center for Kurdish Studies sheds light on the process of drafting a new constitution. We want to look into topics which are discussed in the current Syrian Constitutional Committee, as well as into lessons learned from other  constitutional processes in the MENA region and worldwide.